The Entertainer Arcade Machine is an all-in-one styled machine, coupling together an arcade machine and a mini fridge to keep the good times rolling. Its Arcade, its Music, its Drinks.

The Entertainer Arcade Machine features a 26” HD LCD monitor, Bluetooth connectivity and an internal AUX cord, real arcade buttons and joysticks, locks to secure your drinks and snacks and an extra-large 100L mini fridge. With the option to add your arcade game boards, Raspberry Pi’s and more, the Entertainer machine is the perfect addition for any games or entertainment room.

The Entertainer is more than just gaming. With its Bluetooth connectivity and internal AUX cord, it’s great for parties or chilled afternoon sessions listening to music on your couch. Its lockable doors will keep you in charge of the music during your parties, and stop pesky guests from changing your carefully curated Spotify playlist into some awful music.

The Entertainer’s 100L mini fridge provides an extra-large space for snacks and drinks. With its lockable doors you control when to share your drinks and snacks with your family & friends.

The Entertainer is Here! 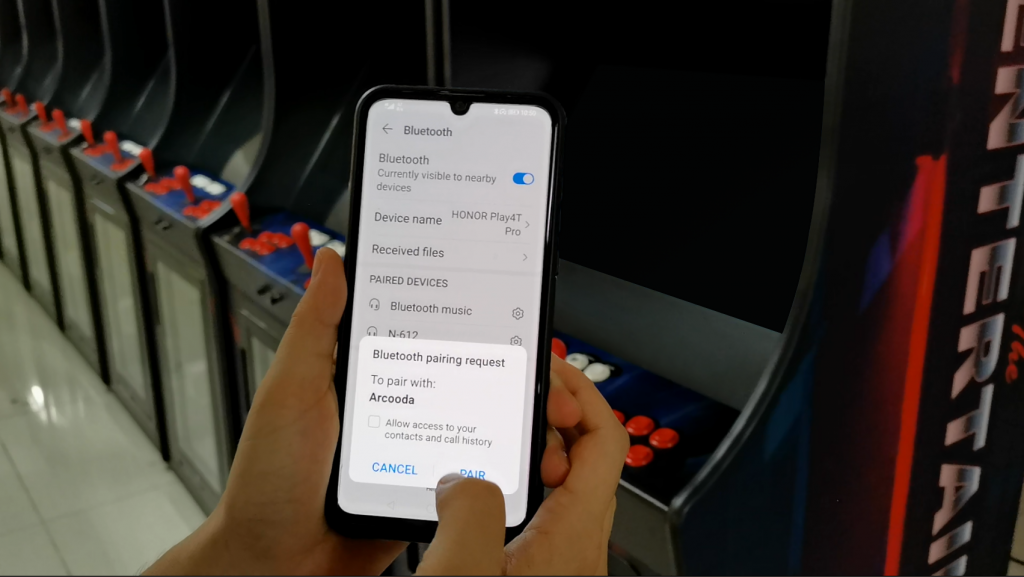 Arcooda is Arcade….. not toys

When we design our arcade machines, they have been developed for gamers, by gamers. We are trying to achieve the best arcade experience, where owners use their machines daily. Many of our customers have purchased a second machine for even more flexibility.
When we make machine productions, we choose the best available monitor available in the market, testing all brands and assemblies prior to assembly. We do not use domestic panels or used monitors in new cases (if you wonder how some Ebay/Amazon sellers are offering machines so cheaply).
In our next productions, we will offer you a choice of monitor that include our standard VGA/HDMI 1080P screens, or other models that include 4K, 144Hz refresh rates, and 1ms response time.
Arcooda is coming from a pure arcade background, where arcade machines must work first time, and have playability that allows gamers to stay longer on an arcade machine. If the “stickiness” of arcade machine is great, it will be reflected in the machine’s income.
Beside how good the quality the game software is, if the cabinet is poorly designed, players will leave the machine.
Its why we do not design our machines like the image below. 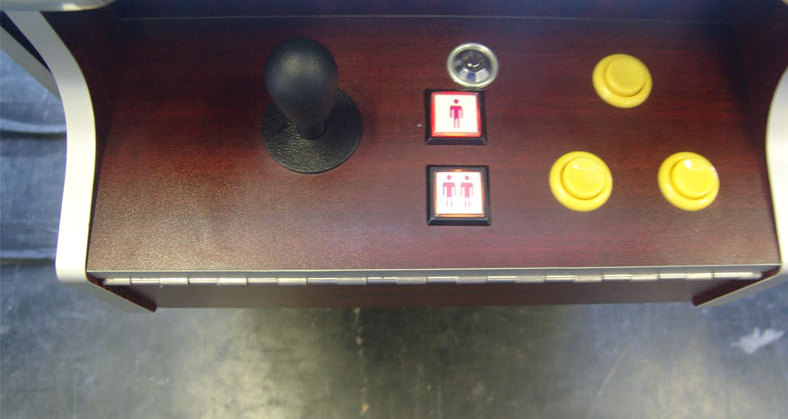 We have made a lot of prototypes and improvements in our cabinets. The position of the mounting plates, and even the springs/assembly of push buttons are super important to us.
We have had some troubles with suppliers who cannot understand why we want things perfect, and abandon the projects midstream. As one distributor mentioned, just get the products into the market and fix them on later productions. But why should we except a lower standard?

Well before the current excitement, Arcooda was working on a new arcade machines.  In 2015 we had built the prototype arcade and pinball machines which we started showing publicly in middle of 2016. These machines used the Highway Controller IO board mentioned previously. 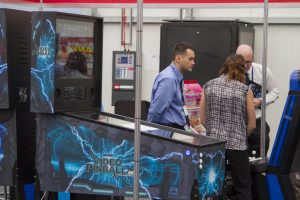 If you visited us during Pinfest Australia in 2016, playing our Android pinball machine in the morning was great. Playing our machine later in the day…no so great. Unfortunately heavy and constant use resulted in the sample motherboards overheating. 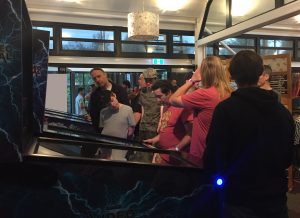 We were working on a new custom multiscreen android motherboard which needed significant product development. Frame rate losses, motherboard overheating, and custom firmware all needed to be solved. 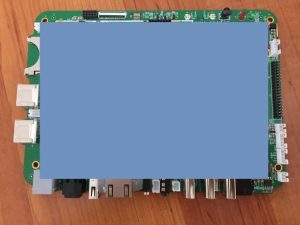 During this period, we talked with Zen Studios about releasing a $699usd pinball product but they were not interested in the project. Later, after signing with FarSight Studios, we concentrated on releasing the 3 monitor PC version first, and then to come back to the Android smaller machines.

At IAAPA 2016, we showed our new Android products that included Touch Wizard, and Game Wizard for Android. 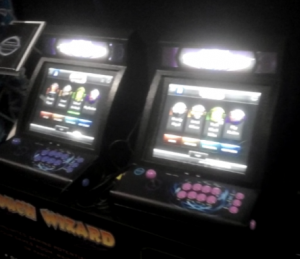 In 2018, Arcooda works with Tencent Games on a larger project for both mobile and android gaming products.

Heroes of Soulcraft, PUBG and exclusive Tencent titles were being used in development work.

Arcooda is part of the Highway Group, an Australian company that has its DNA based in the amusement and arcade industry. But, so many problems the amusement industry was experiencing, we had a fresh vision on what gaming should be, and how to solve these problems for gamers, operators and distributors. It’s the reason why Arcooda was born.

For industry people, you will understand the pain of being an amusement centre or street operator. For years, we feel the industry has kept going in the wrong direction, and opportunities completely missed. More about our coinop dreams later. 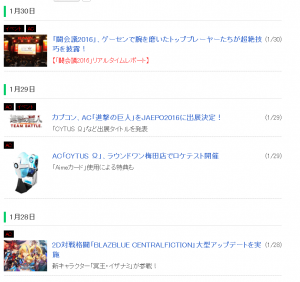 Highway introduced Street Fighter 4 arcade and Tekken 6 into the European market. This was the first time these games were shown into Europe and our trade show products went immediately into Funland Trocadero Centre in the UK. 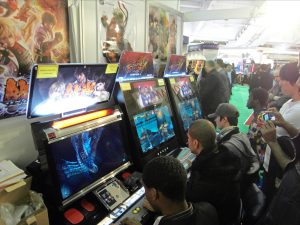 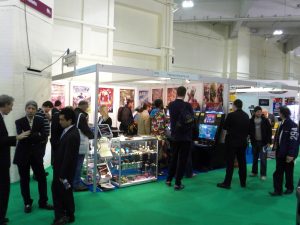 The next release of Street Fighter 5 and Tekken 7 were exclusively online, subscription/paid model products. 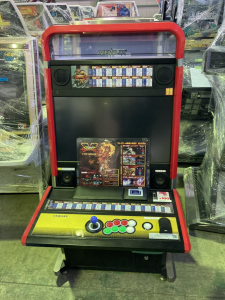 However, many top performing arcade products are never seen outside of Japan…. 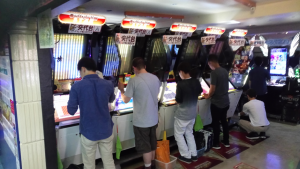 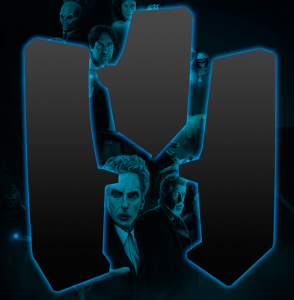 For any Arcooda Pinball customers, our staff have contacted you via email and there are new updates in the private blog. Please check them out when you have the chance.

It’s no doubt our Game Wizard Xtreme is the most versatile gaming machine on the market. We have a new add on that just keeps on giving. Introducing… our Coin Operated Timer Control Panel. This beautiful device not only attracts the wandering eye to the Game Wizard Xtreme but it also adds functionality.

END_OF_DOCUMENT_TOKEN_TO_BE_REPLACED

The new, entry-level model cabinet is suitable for fish hunter style games but it is a fraction of the price of the premium models.

The cabinet includes a 55 inch screen and allows for up to 8 players to join in on the fun.

This model will be built using only the best China-made parts.

As per the customer’s specifications, it can be built with deluxe wiring for plug ‘n’ play, bill acceptors and printers.

In addition to the entry-level model, we also have the Arcooda 8 Player Fish Machine.

Arcooda 8 Player Fish Machine is a top of the range original product with guaranteed income and return investment for owners and operators.

Genuine arcade parts are used to build the machine, which has been specially designed to be have trouble-free operation for many years.

Comparing the Arcooda 8 Player Fish Machine against other fish products

Backglass animations are now complete for a number of Arcooda Pinball Arcade games.

So far, 12 tables in Arcooda Pinball Arcade’s library of games have received backglass animations – and there is plenty more to come.

Arcooda joined forces with FarSight Studios, the creators of The Pinball Arcade, in December last year to create Arcooda Pinball Arcade – a collection of over 70 games that are unique to Arcooda Video Pinball and other Arcooda arcade machines.

While many of the games in Arcooda Pinball Arcade are already well-known and loved, such as The Addams Family, the software enhancements being made to each is what sets them apart from other digital versions.

Since December, FarSight has been writing new software code to enhance the games in Arcooda Pinball Arcade.

This will allow for power management of coils, lights and various motors – meaning the cabinet will light up and shake at intervals where the game allows for it – new camera angles and 3D support, full touchscreen support and backglass support on all tables.

Games to receive a backglass animation so far include: Cactus Canyon, Ciqus Votaire, Attack From Marks, Doctor Who and Doctor Who Master of Time, Terminator 2 Judgement Day and Teed Off.

The dual flipper opto board we have been working on for Arcooda Video Pinball.

There has been plenty of new developments made on the Arcooda Video Pinball machine since the prototype was revealed late last year, which we outline in video one of our all new Checkpoint series.

Keep your eye out for our Checkpoint videos, as this is where we will be revealing more details about the video pinball project and other company happenings.

In Checkpoint video 001, we explained why the Arcooda Video Pinball machine has not yet been released.

We demonstrated the prototype machine at the Australasian Gaming Expo, Pinfest and IAAPA Attractions Expo in 2016 with the hope of an early 2017 release.

However, after much thought, we decided to push this release date back to re-engineer hardware and software components in the machine to deliver a product that looks and feels like a real pinball.

Key component upgrades so far include adding a smart tilt IO board, a custom pinball coil mechanism and a dual flipper opto board.

In December, we announced a partnership with FarSight Studios – creators of The Pinball Arcade – to launch the Arcooda Pinball Arcade.

We asked FarSight Studios to write new software code, which will allow for backglass support on all tables included in Arcooda Pinball Arcade (there is more than 70).

Other areas we have been focusing on is power management for the machine’s coils, lights and motors, new camera angles for the games, 3D support, a new player interface and full touchscreen support.

We are now in the trial phase.

We’ll keep you posted on when the software is ready to play. 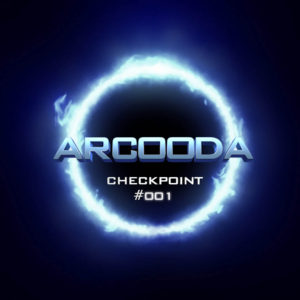 From today, Arcooda will start an all new video series which will provide our gaming community and the wider public with up-to-date company news.

The regular checkpoint videos will feature details and updates on Arcooda projects currently under development and, at times, call for your opinions and input about them.

“There is a lot of new development at Arcooda, and often these developments are difficult to explain just through text,” Arcooda CEO Steve Josifovski said.

“We have created this new video series to share with our distributors and customers many of the projects we are working on, machines we are soon to release, and also to ask for your feedback.

“This video series is a good way to contribute and have your say on what features you would like to see added, cabinet colours, or what further collaborations you would like us to have with other leading software and hardware factories.

“We hope you can be part of our community as the machines we are building are not designed for “one off” game style purchases, but more, where the cabinet can be modified over the years for long term use.”

Checkpoint video one will land on the Arcooda YouTube channel Thursday night.

This video will contain updates on the Arcooda Video Pinball, a new game and machine, plus something extra we’ve been working on – an anti-cheating system.