Arcooda Pinball is much more than video pinball machines. Its a totally Inclusive System where we invite everyone to join us, whether you are a designer, manufacturer, distributor  or just a “pinballer”, we are looking to create an open community where people can get their pinball ideas into the market.

But Arcooda Pinball is more. We have designed completely new products for the coin operated marketplace. With extensive experience in the arcade industry, we are looking to introduce new and fresh income streams for game centre and street operators.

We are looking to make major changes in the way pinball is made and sold. Imagine you as the designer and factory – sell your machines directly, or reach out to Arcooda’s distribution network for help. No exclusive borders, sell and buy pinball machines the way you want.

Pinball manufacturing is not easy. We are looking to change this. 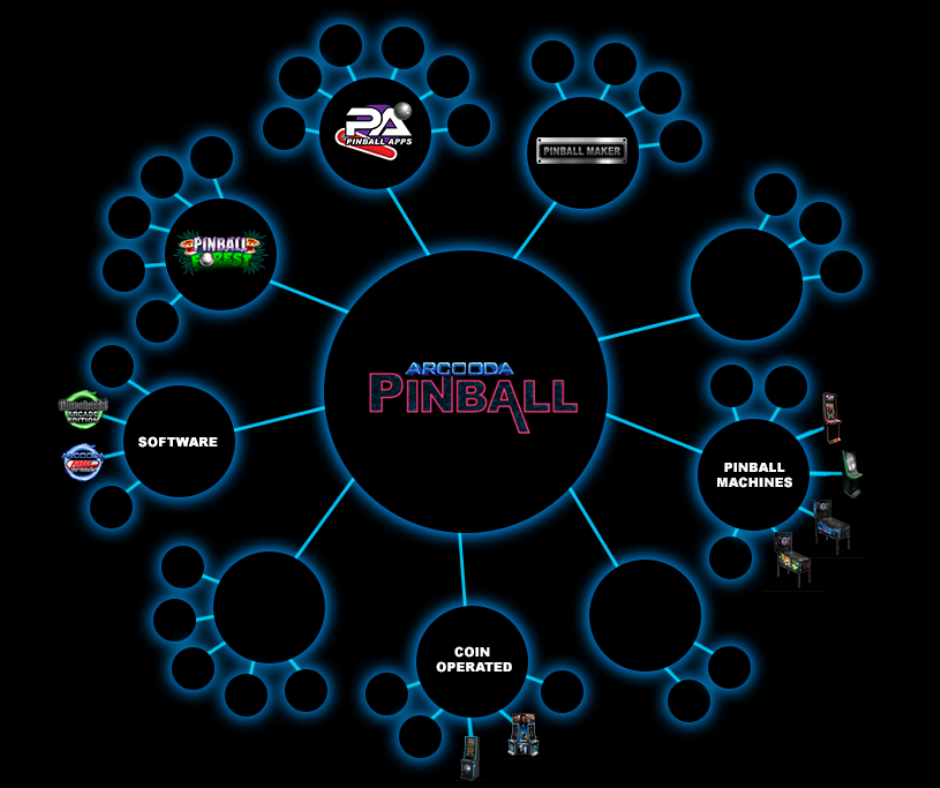 For more information on Arcooda Pinball, please refer to our dedicated site.

The thrill of Las Vegas action right on your Touch Wizard Arcade Machine!

The Touch Wizard desktop arcade machine presents unmatched gaming and entertainment choice. Users can make the most of what Google Play Store has to offer by installing their preferred Android games, social media and music apps. This includes slot and poker games such as Heart of Vegas, Black Diamond Casino, Konami Slots, Lucky Slots, Willy Wonka Slots Casino, Wizard of Oz Slots and many more!

Any games/apps/music shown in this video are not included with the Touch Wizard Wizard. However, these games/apps are readily available on the Google PlayStore. Just download onto Touch Wizard and start playing.

All product and company names are trademarks™ or registered® trademarks of their respective holders. Use of them does not imply any affiliation with or endorsement by them.

The Touch Wizard offers incredible flexibility in entertainment. Enjoy all the benefits of Google’s Play store by downloading your favourite Android games, social media and music apps for the widest range of fun on a commercial-grade desktop arcade machine. Play arcade and pinball games, listen to music, keep up to date on social media or just add your Xbox 360, Xbox One, PlayStation 3, PlayStation 4, Raspberry Pi, PC, and other late model consoles on this plug and play system – no need for additional adapters.

For more information on the Touch Wizard or to place an order please email us on sales@arcooda.com or call our office on +61 249 689 313. 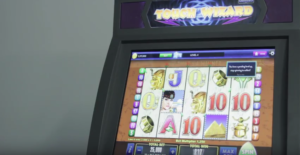 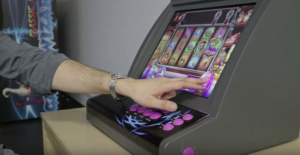 The Game Wizard for Android is your one-stop entertainment hub providing a wide range of gaming and media options for users allowing you to Maximise gaming potential. It is a commercial grade 2 player upright multiplatform machine with real arcade controls and a 26 inch touch screen monitor. Users can simply connect to their Google account and start downloading their favourite apps from Google’s Play store onto the machine including games, social media, jukebox, video streaming and more!

For users looking to get the most out of their Game Wizard for Android, we now have demonstration videos to guide players on the amazing features of this machine. The videos illustrate features such as how to connect to the Google Play Store and install Android games, how to connect PlayStation 3 / PlayStation 4 / Xbox 360 / Xbox One / PC / Arcade Game Boards and how to switch between Android and Console mode. Further, the Game Wizard for Android offers various control options and we demonstrate touch controls, joystick and push button controls as well as plugging in console hand controllers.

The Game Wizard for Android presents unlimited gaming options with the ability to enjoy touch games, arcade, fighting games, platform/adventure games, shooters, and sports games to name a few. In our demonstration videos, we also explore the various entertainment options such as video jukebox, social media, streaming and more! To maximise your Game Wizard for Android’s potential, watch the video below;

We will be sharing more updates and advice on the Game Wizard for Android soon, so be sure to be following us on social media for more tips! We value your questions and feedback, please contact us on sales@arcooda.com or 02 4968 9313. 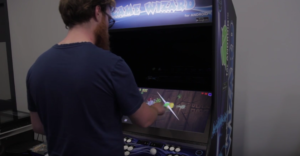 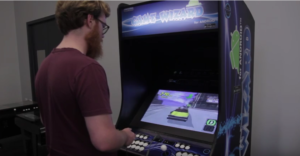 Over 20 new improvements added to our Arcooda 8 Player Fish Machine!

Our Arcooda 8 player fish machine is our export quality, top of the range, fully customisable machine which presents guaranteed income and return on investment for operators. The Arcooda 8 Player Fish Machine can be tailored to suit a wide range of redemption games (Ocean King series, King of Treasures series, Mystic Dragon, Insect Doctor, Seafood Paradise series, your own customised game etc.) and configuration options (key in / key out, coin in / hopper out, coin in / ticket out, bill acceptor / thermal printer, PlayPortal cashless card system and more). Since we have close relationships with hardware and software companies, we can work closely with our customers to modify the machine to suit your market or venue.

We have recently made significant improvements to our machine for even a more profound impact on your market. Over 20 new features have been added to our Arcooda 8 Player Fish Machine including;

Our Arcooda 8 Player Fish Machine is in stock. We accept orders for machine only (customers can add their own software) or we can provide the machine fully loaded with game software and site ready. We are very experienced with the fish hunting series, our sister company Highway Games was the first to introduce the fish hunting games to the US market with modified software and modular components. Talk with our team on what is the best game and configuration option for your market/customer base, we can guarantee that you will earn money with our machines! 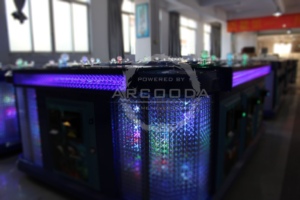 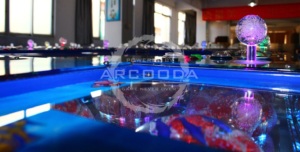 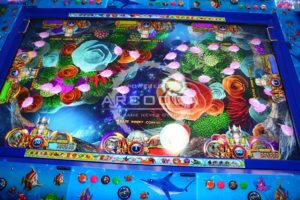 A new hunting game with twist, available as a game board kit or with 8 player Arcooda cabinet

Mystic Dragon is the latest video redemption game available. For players and operators familiar with the fish hunting video redemption games, Mystic Dragon offers something new! Instead of hunting for sea creatures in oceanic landscapes, players take to the skies and hunt for bugs, birds and dragons. The game is available as a game board kit or with Arcooda’s top of the range 8 player Machine. Furthermore Mystic Dragon is available in Chinese Version for Asian markets and English Version for western markets.

Similar to fish hunting games, the aim of Mystic Dragon is to shoot and catch as many bugs, birds and dragons as possible. Up to eight players can go head-to-head against the clock at any one time. The bigger and more characters you catch, the more points you earn. There are over 21 characters to catch in Mystic Dragon including Ladybug, Butterfly, Firebird, Phoenix, Gold Dragon, Queen Bee, Blue Dragon and the ultimate prize Mystic Dragon.

Mystic Dragon is full of features and mini-games that are important to utilise as they offer players a greater to chance to earn more points. New features include; Super Weapon, Chain Link, Fire Dragon Volume and Tornado.;

Super Weapon: There are two birds that carry super weapons. When a player shoots a Super Weapon bird, that player is granted a special gun that shoots a projectile, like a rocket. The projectile zooms around the screen killing characters in its path. The player that activated the feature earns the points from the characters killed during the Super Weapon feature.

Tornado: Shooting a character encircled by the Tornado symbol activates a vortex. Characters immediately surrounding the shot Tornado character are sucked into the vortex, earning the player who activated the feature points.

Mystic Dragon is in stock and available for immediate shipping. The game can be purchased as a game board kit for $1195usd or in Arcooda’s 8 Player Machine (contact us for more details). The 8 player Machine can be set up as Key In / Key Out, Coin In / Coin Out, Bill Acceptor / Thermal Printer, Coin In / Ticket Redemption Out, PlayPortal Cashless System or other. 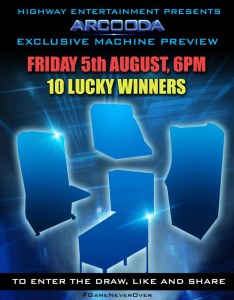 The Arcooda Exclusive Preview Event will be hosted by their Australian distributor, Highway Entertainment, at their Newcastle Office next month. The company will be inviting members of the public and some media to preview selected gaming machines from Arcooda!

Highway Entertainment will be inviting 10 lucky winners to their headquarters in Newcastle to preview Arcooda’s exclusive, never-before-seen multi-platform machines! Winners will be selected via the Facebook competition the company is currently running.

The event will take place on August 5th starting at 6pm, with food and drinks provided for our special guests. The Highway Enetertinament staff will present Arcooda’s most innovative gaming products, which combine arcade and home gaming to create whole new multi-platform gaming machines.

At the Arcooda Exclusive Preview Event, staff will also give special guests a brief walk- through on how to set up and play the machines with different consoles and platforms. After that the floor is all yours – play games and share an unprecedented gaming experience!

To enter for a chance to be one of 10 lucky attendees, simply head to Arcooda Facebook and Like the page, then like and share the competition status with your friends! Winners will be announced on July 29th at 4pm, so be quick and don’t miss out!

Arcooda Manufacturing is currently gauging interest to make a special production run of a 29 inch 4:3 LCD monitors, which will be suitable for older arcade machines such as Daytona USA, NBA , etc.

The reason behind the development is the number of problems machine owners and operators run into when they have to upgrade their screens on machines that were made with 29” CRT monitors. It can be difficult matching current wide screen LCDs with existing arcade machines due to 4:3 vs 16: 9 configuration, as well as video signal mismatches.

Arcooda is proposing this special production run of monitors to be an effective solution to this issue, allowing owners and operators to update their classic arcade machines.

In most cases, operators have been purchasing the widescreen LCDs and making panels to cover the smaller footprint as well as using video converters to upscale the images; effectively sacrificing monitor size for a sharper and brighter picture by retrofitting an LCD screen this way.