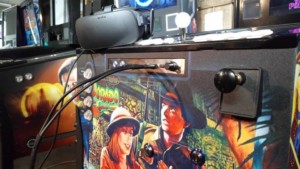 Plug in your Oculus Rift, HTC Vive and other VR equipment to experience VR pinball which will include pulling the actual machine plunger to launcher ball, cabinet flipper buttons to control flippers in game play and pushing the cabinet for real nudge effect.

More information and videos of VR game play will be released soon.